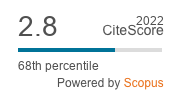 The present study aimed evaluate the influence of the climate elements at the different times of the day on the thermoregulatory mechanisms of pure Saanen goats and crossbred ¼ Saanen + ¾ Boer, created in intensive system in semi-arid Paraiba. Were used 16 goats, 8 pure females Saanen and 8 crossbred ¼ Saanen + ¾ Boer, distributed on a DIC (completely randomized design) in factorial 2x12 (two different races and twelve hours). Were evaluated the environmental and physiological parameters at the different times: between six and seventeen hours. In the environmental parameters is observed that temperature index of the black globe and humidity increases throughout the day, reaching the highest value (84.16) to 13 hours. As low ten o'clock, ambient temperatures exceed the thermal comfort zone for goats. For the RT is observed that there was no statistical difference between the genetic groups in the times of 7, 10 and 16 hours, and the highest average found in the crossbreds and the times of 13, 14,15 and 17 hours. For the RF, the group of pure Saanen and schedules of 14 hours showed the highest average. In the ST there was no effect of genetic groups. The variation in ambient temperature directly influences the physiological responses of the animals. The Saanen group is less tolerant to semi-arid climate than the crossbreds.